With the tragic case of missing 22 year old Bacchus Marsh woman Sarah Cafferkey being upgraded to murder, it has now been revealed a man wanted for questioning by Police is a convicted killer.

Steven James Hunter, a 46 year old Point Cook man, was sentenced in 1986 to a maximum of 16 years jail for the murder of 18 year old Jacqueline Mathews.  It is understood both worked together at a supermarket at the time, and after refusing his advances, Hunter carried out the fatal attack.

Further reports state Hunter was subsequently convicted of other crimes such as  kidnapping and sex offences after serving only 12 years.

During the initial days of Sarah Cafferkeys’ disappearance, attention turned to her Facebook profile where it was identified recent messages had been exchanged between herself and Hunter indicating the two were familiar with each other. 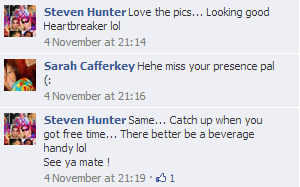 Perusal of Steven Hunters’ open Facebook profile further suggested he had recently been through a breakup and even more disturbingly, had tagged and referred to his previous residence as “The Rape Dungeon”.

With news reports confirming a crime scene at Fongeo Drive, Point Cook, online investigators and web sleuths again referred to Hunters’ Facebook account where it was revealed Hunter had tagged himself at home at Alamanda Estate Point Cook – the exact location of where human remains formally identified as Sarah Cafferkey were found..

While there is no suggestion these Facebook posts led Police to the address in Fongeo Drive, it can certainly be assumed Hunters’ Facebook profile has confirmed why he is a “person of interest”.

2 thoughts on “MISSING PERSONS: Why Steven Hunters’ Facebook profile made him a ‘person of interest’”