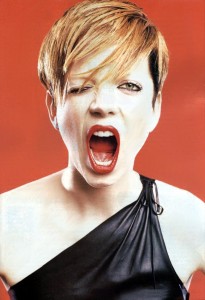 One day after 90’s Rock Band Garbage released their well overdue new album, Not Your Kind of People, an individual has taken to Twitter under the pseudonym Gunn2urhead to barrage the official Garbage account with over 270 harassing tweets.  The tweets focus mainly on threatening lead singer, Shirley Manson and include the following frightening messages:

It has been reported that the band’s manager Paul Kremen contacted Police shortly after the first messages appeared on May 16th and a search warrant was executed on Twitter by the LAPD on May 30th.  No further messages have been left on the account since the 21st June however it is understood Police are still investigating.

The band’s manager further added: “[Manson] stated that she is in great fear for her and her family’s safety due to the nature of the threats, the sheer volume of them and the ‘crazy’ sounding messages being posted towards her,” the warrant details. “She stated she has never had anything like this on this level occur to her and she is very frightened and wants the threats to be investigated fully.”

Cyberstalking is not just affecting celebrities though.  Ex-partners, jealous co-workers, disgruntled customers have all been known to wage cyberstalking attacks on unsuspecting individuals.  With Police resources struggling to keep up with the complaints, it certainly begs the question whether enough is being done by the social networking sites themselves.

Jeff Dunn, the officer in charge of the LAPD’s threat management unit provides a timely warning for individuals to watch what information they are posting about themselves online.   “[When individuals post information on social networks] You are providing background information [stalkers] can build on. Facebook has created a lot of problems for us. They are putting everything about themselves out there and sometimes posting risqué photos, and it is a stalker’s dream.”

As well as laws governed within each State, Cyberstalkers can be charged in Australia under the Criminal Code Part 10.6 with using a carriage service to menace, harass or cause an offense to the reasonable person as stated in Part 10.6, Division 474.17(1).   This carries an imprisonment term of up to 3 years.

If you believe you are a victim of cyberstalking or social media fraud, ensure you document everything.  This includes taking screenshots of the messages (in case the profile is later deleted) and recording full details of the URL of the offending account.  Most importantly – do not engage in conversation with the account.  It can be incredibly tempting to respond to these messages, however this only motivates them further.